In December 2005 Terradaily published a report from Agence France-Presse  on a scheme to reduce oil dependence in Portugal by installing a wave generating farm, 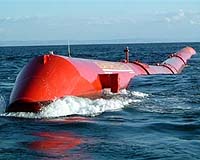 &ldquo;Portugal is turning to wind, wave and solar power to reduce its huge dependence on oil imports and meet its international commitments to reduce carbon dioxide emissions.

The wave power plant will be set up by a Portuguese consortium in the Atlantic about five kilometres (three miles) from the town of Povoa de Varzim and it will generate 2.25 megawatts of power from 2006 -- enough to supply 1,500 homes.

The generators look like giant floating sausages and they rock with waves, pumping water to hydraulic motors that drive generators to produce electricity.

If the initial phase is successful, the consortium said it will order 30 more Pelamis P-750 generators by the end of 2006.

The government wants waves to provide 50 megawatts of power by 2010 but experts believe the country has the potential to produce far more wave energy because it has deep waters just off its shores that generate strong swells&rdquo;
.
Unfortunately the experiment was not a success and the ''sausages' were quietly removed for modification.  Local sources say that the swell was too great for the machines.

This trial has left yellow buoys, some with flashing lights in the sea where the experiment took place, These buoys mark the end of the cables to the shore and an ODAS wave measuring buoy two miles to the north.

At the time of writing there is no area that is restricted to navigation.

The position colour and light characteristics are as follows: